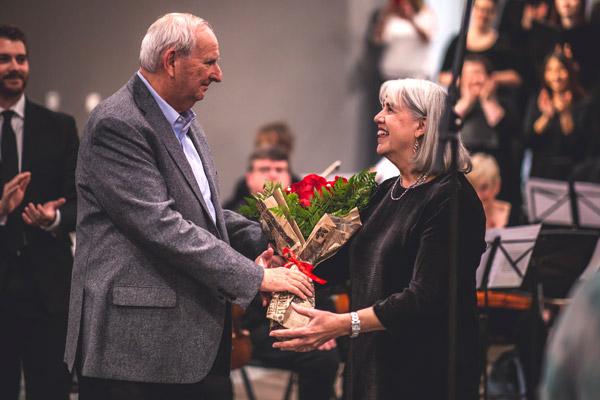 Travis McAfee
Ken Baker presents flowers to his wife Robbie Baker Nov. 20 after a concert in Fayetteville that she composed for her 70th birthday.

Travis McAfee
Ken Baker presents flowers to his wife Robbie Baker Nov. 20 after a concert in Fayetteville that she composed for her 70th birthday.

Music to their ears

Read more about Catholics who blend music and spiritual life:

ROGERS — Music has always been a part of Robbie Baker’s life. So it made sense that music would accompany her birthday celebration. But this wasn’t just any birthday, and the music wasn’t just the tune of “Happy Birthday.” This was Baker’s 70th birthday and she composed and wrote an entire concert from years of writing music to honor the occasion.

Baker, a member of St. Joseph Parish in Fayetteville, began taking music composition classes at the University of Arkansas at the young age of 61. As she learned, she began writing the music for poems she had written, ideas she wanted to express through melodies and even the writings of other people she would set to a melody or song. One piece she wrote the music for and presented was a poem written by Father John Marconi several years ago. The Little Rock priest was in attendance the night of the concert.

A year ago, in November, Baker came up with the idea of marking her years of living with a concert. Last Christmas, she began looking through her pieces and deciding which ones would present well. Then on Nov. 20, her idea and the concert became a reality in front of a crowd of 120.

With the help of Brett Cudy, choir director at St. Joseph Church in Fayetteville, 32 choral singers and a 19-piece orchestra were assembled together to learn, rehearse and perform Baker’s compositions for a one-time performance at Grand Village at Clear Creek in Fayetteville.

“My mom, Dorothy Wright, passed away four years ago,” Baker said. “Afterwards, I bought a grand piano and dreamed about having a concert like this. The concert far exceeded my expectations, I have gotten to know so many young people that were a part of it. That has been a real gift to me.”

The concert included all pieces that Baker composed with several solos for violin and piano, some vocal solos and even some Mass parts that Baker has composed in Latin.

“One of my favorite compositions, is an early 1920s poem by Karle Wilson Baker titled, ‘Let me grow lovely as I grow old.’ I wrote the melody for the poem. It was a soprano solo with piano accompaniment,” Baker said.

As far back as she can remember, Baker said she has been singing and has taken piano and organ lessons. Even in high school in Woodland Hills, Calif., she was a madrigal singer. But no matter the stage in her life, her passion for music has survived.

“Early in 2009, I was diagnosed with cancer,” Baker said. “In 2010, I was trying to recover and I was taking music lessons from my daughter. I fell in love with writing music. I decided to go to Dr. Robert Mueller at the University of Arkansas in the spring of 2013. I have been learning composition from him for the last seven years.”

Perhaps Baker’s biggest presentation thus far is her marriage of 51 years to her husband, Ken, and the births of their six children and 13 grandchildren. Baker has lived all around the United States and in Canada for a short time. But, moving to northwest Arkansas is also what brought her and her husband to the Catholic faith. In 2007, they came into the Church at St. Raphael Church in Springdale. Another accomplishment, her book, “Heart Washed: A Journey of Grace,” published in 2018, shares her story about living with cancer as well as her conversion story.

However, this concert was not a swan song. Baker is already working on a piece she can only call, “Soaring,” and she said it is her biggest challenge yet.

“I had an experience and a physical sensation of being in the sky soaring with eagles,” she said, “so this piece would have big sweeping, soaring chords. I hope that when it is done that people feel that they are soaring with me.”

“God has blessed me with a rich and full life,” Baker said. “Every day since I was diagnosed with cancer, I feel like God has blessed me to bring him glory, and I hope that’s what my music does. When music is such a deep part of your soul, that is the best way to stay connected to God. Music is a way to express what we cannot often say in words.”

Music to their ears

Read more about Catholics who blend music and spiritual life: