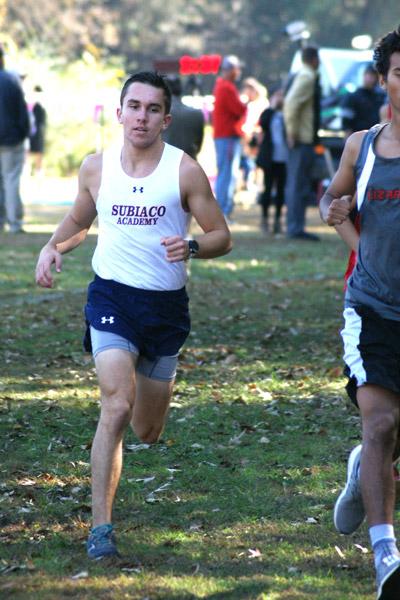 Brother Raban Heyer
Subiaco’s Jacob Bristol closes in on a rival runner in a cross country race. The senior credited running and his coaches for developing his servant leadership skills during six years competing for the Trojans.

Brother Raban Heyer
Subiaco’s Jacob Bristol closes in on a rival runner in a cross country race. The senior credited running and his coaches for developing his servant leadership skills during six years competing for the Trojans.

Read more about athletes who rose to the challenge in their sport:

Parson Simmons diving into sport few know much about (May 14, 2019)

Brooke Green rises from tragedy to dominate her sport (June 25, 2019)

As a star runner for Subiaco Academy’s cross country and track teams, Jacob Bristol has long accepted the solitary nature of his chosen sport. Long training runs and the structure of racing that places performance responsibility squarely on the individual have honed that understanding to a keen edge.

So it was to his great surprise that in this, his final season leading the Trojans, he would discover this singular focus on his own performance was blinding him to other, impactful insights.

“It was quite the moment that I realized all the things that are a part of running,” he said. “Sadly, it wasn’t that long ago; for my six years of running, it was really just the last year of cross country where something finally clicked.”

Running had been a salvation for Bristol since landing at the Logan County school as a seventh-grader. It was a difficult adjustment; his parents lived several states away and were frequently out-of-pocket in their jobs as airline pilots. Bristol, who had final veto power over coming here in the first place, nonetheless battled intense periods of homesickness.

“I was the youngest kid in my class,” he said. “It was an environment where a lot of people knew each other. There was a lot of tradition, a lot of seniority. When I first got here, I went from being cared for by my parents and by my siblings to being by myself and having to watch over what I’m doing. It was a difficult change.”

Bristol survived by getting involved on campus. Over the years he’s been part of several clubs and organizations as well as got into weightlifting. Each activity gained him new friends and helped him feel more at home.

“It can be a really boring experience if you don’t go out of that comfort zone and just stay in your dorm the entire day,” he said. “That’s what I realized seventh and eighth grade years.”

Among the things he sampled was running, something he’d never done competitively prior to coming to Subiaco.

“In my head, all cross country was was a way to get in shape for basketball,” he said. “Once I found out I can’t even shoot a two, I kind of switched those around where basketball was just training for cross country, especially since I was running the bleachers pretty much the entire time. It worked out for the best.”

His competitive outlet found, Bristol settled into becoming a champion runner. Onlookers among faculty and staff saw a change in his personality and his grades, even as he continued to challenge himself with harder workouts and even harder coursework. Brother Raban Heyer OSB, who’d coach him on the high school squad, said he developed a spiritual depth as well.

“He began attending the Liturgy of the Hours, praying regularly with the monks,” Brother Raban said. “His sophomore year in track, he began leading the other athletes in prayer before every practice. Through constant prayer, his ability to care for and empathize with others blossomed and continued to grow through his senior year.”

Which brings us back to Bristol’s a-ha moment. Attending a retreat for all athletic captains last summer, he began a spiritual awakening that would realign his goals for senior year and beyond.

“I was always in a leadership position when it came to running; even as a seventh grader, I would watch over the other seventh graders,” he said. “But my leadership was strictly yelling at them until they ran, which really didn’t do much.”

“Brother Raban took us all in the week before school, and we went over a book called ‘Humility Rules’ and went over how humility is the most important part of a leader. We went to all the prayers with the monks — basically we were monks for five days — along with reading the book and talking about that.”

Overnight a switch flipped and Bristol went from being consumed with lowering his time and achieving individual goals to looking around at how to better lead others to theirs.

“All of a sudden, we had a race coming up, and I didn’t care so much about being the best runner there. It was a lot more about the people around me,” he said. “I was really able to enjoy my friends who were there with me. It was an experience to be able to go to a cross country meet and think about it as I want to be here with my friends, so let’s bring each other up. They’re bringing me up, I’m bringing them up. It was really important to me.”

Bristol’s change of perspective was so profound that even today he doesn’t talk about his own career wins except to say that he ran hard and won here and there. But get him on the team’s accomplishments — capped by a trip to state this year — and he can’t say enough. With high school’s finish line in sight, he’s grateful for the new outlook.

“I’ve run upwards of 50 cross country meets and the last two were the only ones that I was like ‘Great! We’re going to be so happy to go here and it’s going to be a great time. All of us buddies,’” he said. “It took me about six years to develop that, but I was so happy that I was able to see it like that and enjoy my cross-country season and give that joy to my other teammates. It just took that humility and realizing the bigger picture.”

Read more about athletes who rose to the challenge in their sport:

Parson Simmons diving into sport few know much about (May 14, 2019)

Brooke Green rises from tragedy to dominate her sport (June 25, 2019)