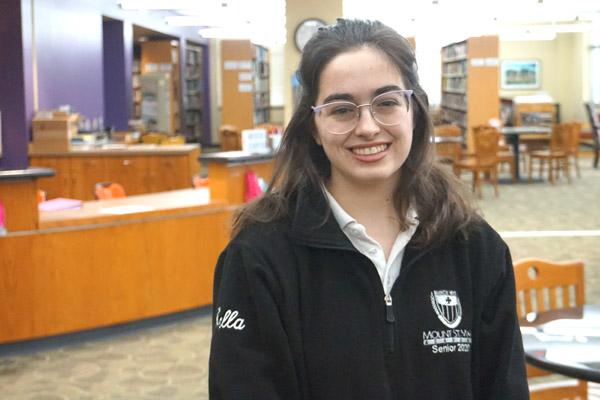 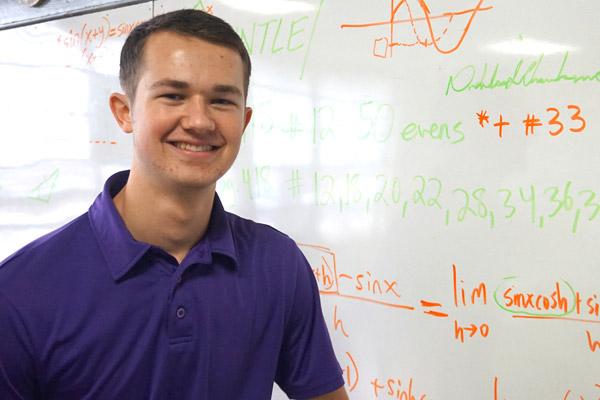 Aprille Hanson
Junior Caleb Mallett, 17, smiles in math teacher Jeremy Elsinger’s classroom at St. Joseph School in Conway. Mallett is believed to be the first person in the school’s history to earn a perfect ACT score.

Aprille Hanson
Junior Caleb Mallett, 17, smiles in math teacher Jeremy Elsinger’s classroom at St. Joseph School in Conway. Mallett is believed to be the first person in the school’s history to earn a perfect ACT score.

On paper, students Caleb Mallett and Bella Boyd have little in common — they go to different schools at different grade levels, and have different extracurricular activities and beliefs. However, they are united with less than one-half of 1 percent of students nationwide who have scored a perfect 36 on the ACT, a standardized test used for college admissions.

Beyond the shared academic achievement, they are cut from the same cloth when it comes to their humility and kind-hearted spirits.

The test includes sections on English, reading, mathematics and science, with a total of 215 questions scoring each section on a 1 to 36 scale. Each section is timed, with a total test time of 2 hours and 55 minutes.

The composite score is the average of the individual section scores, according to ACT.org. Of the roughly 1.8 million U.S. students in the graduating class of 2019 who took the ACT, only 4,879 earned a 36, according to ACT.

“I’m not the best at loving myself, that comes with that perfectionist mindset, but knowing that Gods’ going to love me no matter what, even if I get a 35 on the ACT.” Caleb Mallett, who scored a perfect 36 on his most recent ACT

Junior Caleb Mallett, 17, attends St. Joseph School in Conway. Principal Diane Wolfe said Mallet is believed to be the first in the school’s history to earn a perfect ACT score. He has taken the test four other times, earning a 34 twice and a 35 once. He admits any nerves he has going into the test melt away when he zones in, seeing as the worst-case scenario on the test already happened in seventh grade — his calculator died. He still managed a 28 composite score.

Though he was shocked to find out his perfect score the day after Christmas, he strives for perfection.

“The night before the test I prayed a lot,” he said. “In that moment right before they hand out the test I kind of just turn it over to God and put it in his hands, ‘Thy will be done.’ Just say you know I can’t really control it, I mean I can control it, but the score is going to be what the score is going to be. Whatever happens, happens,” he said. “Knowing that I’m loved no matter what because I’m not the best at loving myself, that comes with that perfectionist mindset, but knowing that Gods’ going to love me no matter what, even if I get a 35 on the ACT.”

Since then, it’s been a surreal whirlwind of media coverage, most notably a phone interview on the nationwide country radio show “The Bobby Bones Show,” with an estimated three million listeners. Bones, a native Arkansan, saw Mallett’s achievement on social media, saying during the interview, “I love this. Who cares about country stars and athletes, this is my hero right here.”

“It was crazy … I never would have expected someone like him to take an interest in me,” Mallett said.

Mallett prepared by using ACT practice tests and on the Saturday before the test, he woke up early to take a test, mimicking what he’d experience the following week.

“I would talk to Mr. (Jeremy) Elsinger (trigonometry and pre-calculus teacher) and on the Friday before the test, I would stay after school and we would go through those practice books in the math section and just find all the problems that looked difficult that I had missed or just the challenging ones,” he said.

This year, Mallett joined the bowling team, achieving a 224 personally and a 182 in competition.

“I’m very much of an over-thinker, but for some reason, those tests and bowling are the two things where I’m able to push that away and just see my goal and go for it,” he said.

Senior Isabella “Bella” Boyd, 18, who attends Mount St. Mary Academy in Little Rock, scored perfectly after taking the test only once before, scoring a 34. It was the second year in a row a student from MSM scored a 36, with two students earning the top score in 2019.

“It was the middle of the night and I was just kind of astounded at first. I thought it was a dream a little bit, ‘Oh this must be a funny dream,’” when she woke up and decided to check her score. “… I was shocked because I didn’t think I did as well that time.”

Boyd said the English and reading sections have “always been easy for me,” crediting the MSM English department.

“I think the hardest part is keeping your focus up for so long a period of time. I underline a lot of things, I mark the answers that I know are wrong, that just helps remind me of what I’m thinking about,” she said. “I also mark the questions I’m not sure about.”

For three years, Boyd has competed in Odyssey of the Mind, a team that competes in creative problem-solving challenges. They’ve earned first in state two years in a row, earning awards for exceptional creativity, and reached the world finals.

“I think that Odyssey of the Mind has really helped me with being creative and coming up with better ideas and learning how to work well with other people in groups,” Boyd said. “I think it’s helped my critical thinking skills. And I think outside of the ACT, I think it’s really shaped me as a person just because it’s taught me to stand up for my opinions, but also listen to other people’s.”

Monica Madey, coach for Odyssey of the Mind and Boyd’s former English teacher, said her skills are diverse, noting she’s “very much an artist and a scientist.”

“She can really apply this creative eye to a problem. I think it does serve her in multiple disciplines because she can create a beautiful aesthetic product, but she can also solve structural problems,” Madey said. “… She’s really naturally gifted but also works really hard and that’s like a match made in heaven,” Madey said.

But beyond academia, Boyd, who is not Catholic, is a “warm and attentive friend,” Madey said.

“She’s a great member of her team, not only because she’s always willing to take time out of her work to help others with their work. For example, she’s kind of our costume guru this year (for Odyssey of the Mind) so she’s always offering to help sew someone’s costume,” Madey said. “… She’s also a great encourager of her team, whether through literal affirmations or just through breaking the tension and cracking a joke.”

Mallett and Boyd are still considering colleges. Boyd hopes to major in mechanical engineering and Mallett said he’s considering a career in math or science.

MSM teacher pushes others to conquer the race of life

Think you have plans? God may surprise you