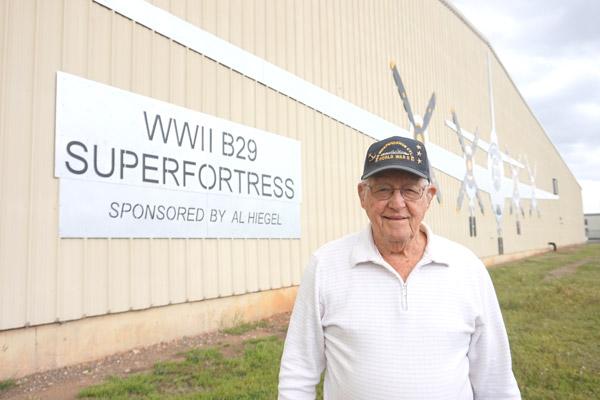 Aprille Hanson Spivey
World War II Navy veteran Al Hiegel, 94, a parishioner at St. Joseph Church, stands by his full-scale steel mural of a B-29 Superfortress on the side of an industrial building in Conway. It was installed in the summer of 2020.

Aprille Hanson Spivey
World War II Navy veteran Al Hiegel, 94, a parishioner at St. Joseph Church, stands by his full-scale steel mural of a B-29 Superfortress on the side of an industrial building in Conway. It was installed in the summer of 2020.

CONWAY -- For the roughly 14,000 cars that pass through the intersection of Bruce and Harkrider Streets in Conway each day, the full-scale steel silhouette of a Boeing B-29 Superfortress fastened to an industrial building is hard to miss.

“World War II and veterans. St. Joe furnished 136 boys and girls in World War II, just St. Joe. And there were 134 boys and two girls. I put it up there so people would know,” and remember the sacrifices of World War II veterans, Hiegel, 94, said. He is the only remaining veteran from the Second World War in the parish.

It took about four months from the initial idea, when Hiegel spotted the large building, to the installation, said Hiegel’s grandson, Greg Hiegel, who collaborated with Lucas Strack of H+N Architects and Bruce Baker with WesCon Machining.

“The toughest part is probably there’s so many pieces. ... there’s literally thousands of pop rivets holding that … Took my guys a solid week to put that whole thing on the building.” Greg Hiegel, grandson of World War II veteran Al Hiegel

A meeting was set up with the building owner, who asked not to be identified. “Grandpa convinced them that it was OK to put a B-29 on the front of it,” Greg Hiegel said.

Strack drew out the design on AutoCAD software and WestCon Machining cut the individual pieces. Greg Hiegel, owner of Hiegel Building Solutions, provided the labor and equipment for the installation while Al Hiegel provided materials.

“The toughest part is probably there's so many pieces. It's one thing to lay it out on the ground but when you're trying to line it up … 140 individual pieces, that all had to line back up on the building, and so we used a lot of earth magnets to pin things into place. Then everything got drilled and pop-riveted in place,” Greg Hiegel said. “So there's literally thousands of pop rivets holding that … Took my guys a solid week to put that whole thing on the building.”

It was installed last summer.

“I love the B-29 because they helped win my war with me,” Al Hiegel said.

It wasn’t the first airplane design Hiegel thought up. On his barn is a similar design, an F4U Corsair plane made of metal, all painted and put together by Hiegel himself on three overhead garage doors.

“I put that on my barn out here when I was 90 years old,” Hiegel laughed.

His love for planes started early, watching the airport from St. Joseph School.

Hiegel joined the Navy and graduated from St. Joseph High School in 1944. He was stationed on the U.S.S. Independence aircraft carrier in Hawaii in 1945 as a radar operator, watching closely for enemy planes.

“I prayed,” he laughed, adding there were anti-aircraft guns on the ship. If they made a “womp” noise, a fire-fight was a long way off. “But when these little ol’ gunners started to go ‘pop, pop, pop, pop,’ it’s time to pray.”

During the Battle of Okinawa, Hiegel said 1,500 Japanese kamikaze planes flew in.

“They would go after the largest aircraft carrier they could find and dive into it. And I was on the second largest. I wasn’t the largest aircraft carrier, so that's what saved me,” Hiegel said. “I was on the only carrier that did not take a kamikaze in that battle. One of the kamikazes lost control and he tried to hit a big carrier, and he couldn't get to it, so he took my ship as a target. And he hit the water right in front of my ship, in front of the bow. And other ships in the fleet were shooting at this guy all the way down, and he was so close to my ship, that friendly fire killed one of the boys on my carrier.”

He was honorably discharged in 1946, returning to Conway to marry his high school sweetheart, Mary. The two were married 72 years before Mary’s 2019 death. With three children, 14 grandchildren and several great-grandchildren, “I have 70 souls in my family,” Hiegel said.

He ran Hiegel Lumber Company for 50 years, but his passion was flying. He flew for 60 years, piloting his last flight at 85.

“He took countless people up. And they all get a certificate, my wife still has hers on our refrigerator, ‘Al Hiegel on this day, first flight,’” Greg Hiegel said. “... I had people the other day from like back in the early ’90s saying ‘Hey, I still have my certificate.’ He was very generous.”

In 2007, Al Hiegel was awarded the Wright Brothers Master Pilot Award for 50 years of flying without an accident, given by the Federal Aviation Administration.

While the B-29 replica was a success, he’s not done yet. Hiegel’s next goal is to create a “landing strip” leading up to his barn with the Corsair plane design. Greg Hiegel is already planning to paint the concrete black with white strips, following his grandfather’s designs.

“That’s coming up,” Al Hiegel said with a smile.