For 20 years, deacon has been inviting college students to deepen their faith 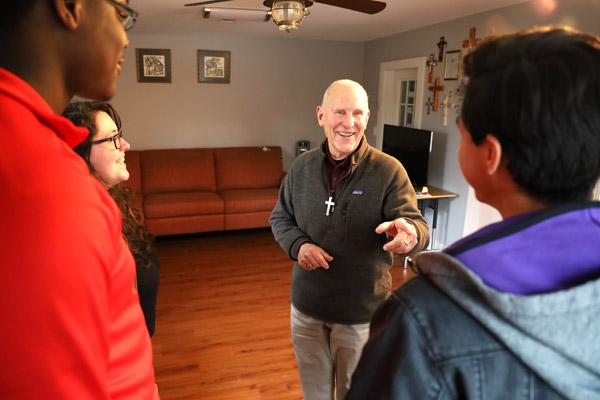 Evangelical Catholic igniting passion for faith at Conway colleges (May 26, 2012)

CONWAY — Deacon Richard Papini remembers how naïve he was as he reported for the first event of his first semester in charge of the Catholic Campus Ministry in Conway.

“I thought they’d just be lined up waiting to get in,” he said, followed by a knowing shake of the head.

In reality, only a couple of students showed up, separately, that first evening. But one of them planted a ministerial seed in him that would grow and flower for the next two decades.

“A young woman walked in, she’s a sophomore. She came in there and started sharing with me just how bad her freshman year was on the UCA campus, because she was getting beat up by people, getting told she was going to hell because she was Catholic,” he said.

“You see them taking hold of their faith and really utilizing their talents and pouring themselves into it. That’s what keeps me coming back.” Deacon Richard Papini

“And she told me, ‘I prayed all summer that God would send somebody to this ministry.’ And I said, ‘Well, here I am. He sent somebody.’”

“Just to hear that story was really a confirmation for me that God answers prayers, number one, and that there was a need here that God pulled me out for.”

The organization looks a lot different than it did 20 years ago. Catholic Campus Ministry moved into a new house in August, a leased space that offers more office and meeting rooms, including a large main area where CCM celebrates Mass. The numbers have changed too, to about 100 college kids a year who take part in various scheduled activities including a praise and worship night, Bible study and fellowship gatherings. Papini is in the center of it all and, students say, better than ever.

“He’s a person you can talk to and he puts you at ease. If there’s anything you need, he’s willing to stop what he’s doing to help you with it,” said Malachi Morse, 20, a sophomore from Los Angeles. “My first year of college was challenging; I battled a little bit of depression. Going to CCM helped me through that and helped me connect closer to God.”

“When you come into college it’s so easy to get lost in the shuffle,” said Cameron Heslip, 18, a freshman from Maumelle. “He makes you feel like you are his favorite in the entire group. You walk up and you feel like you’re the only person he’s paying attention to, but he does it to everybody, so everybody is just so full of joy when they see him. Which is a really cool thing, because a lot of times students don’t get that, being lost in how many students there are. It doesn’t matter how many people walk through his door, he wants to know every single person individually.”

In 20 years, not much has changed about college students, Papini said. But interacting with them has changed him, in some ways dramatically.

“I’ve tried to be more accepting of a student, or anybody, where they are,” he said. “Trying to show some kind of compassion for them, trying not to be a hard-nose.”

“It’s a challenge to maintain that kind of demeanor because on the one hand, you’re always being disappointed. You can’t rely on them saying, ‘I’ll do this.’ But on the other hand, you see them taking hold of their faith and really utilizing their talents and pouring themselves into it. That’s what keeps me coming back.”

Campus minister Kasey Miller, who joined the ministry six years ago, is Papini’s polar opposite in many ways. He’s cradle Catholic, she’s a convert; she’s the students’ big sister while he’s the favorite grandfather; she gets technology, he doesn’t. Despite this, and aside from some early hiccups, the two have become an effective ministerial team.

“He was very open and intentional about being ready to take risks,” she said. “We’ve tried things that have crashed and burned where no one showed up and that’s OK. The fact that he allowed me and the students to try new things and they failed speaks to the fact he takes the long view, where a lot of ministries are very hesitant to try something if it’s not going to work right away.”

The deacon said he discovered long ago that simply unlocking the door wasn’t going to attract Catholics on campus, you have to go get them where they are. Johnny Ramirez, 22, a senior from Arizona, said once they get here, students find the deacon has a lot to offer.

“For most people, when they think of CCM, they think of Deacon Papini,” he said. “He’s got so much insight on how to grow. When you’re young, you think you have it all together and he doesn’t necessarily challenge you in that way, he just makes you think a little more, a little deeper. You figure things out on your own, but the fact of him just listening helps you discern a lot.”

The group counts two vocations among their alumni — Father William Burmester and seminarian Omar Galván — and Papini is always on the hunt for number three. But he’s equally proud of the people who have taken up the mantle of responsibility and become lay leaders and evangelists in their home parishes.

“This is the hope of the future,” he said. “These students, I keep telling them, ‘You are going to change the face, not only of the world, but of the Catholic Church.’ They’ve got that potential and if we can just guide them in the right direction and they have something to leave here and be a part of, they can do so many things.”

At 76, Deacon Papini is as lively as ever. Congregating for a weekly Bible study, each college student gets a hug, a high-five or a slap on the back. He’s quick with a joke and even quicker to laugh at someone else’s. Someone quips that he’ll be around for another 20 years and he doesn’t disagree, he just grins broadly.

Evangelical Catholic igniting passion for faith at Conway colleges (May 26, 2012)