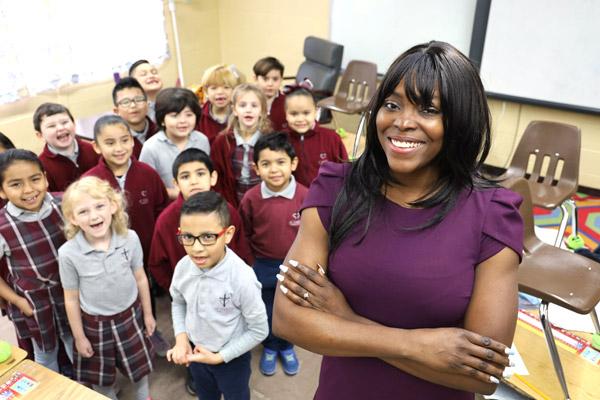 Dwain Hebda
Jamaica native Alicia Straub poses with her first-grade class at St. Theresa School in Little Rock Feb. 7. Straub, a former collegiate standout in track, is in her first year as the school’s athletic director.

Dwain Hebda
Jamaica native Alicia Straub poses with her first-grade class at St. Theresa School in Little Rock Feb. 7. Straub, a former collegiate standout in track, is in her first year as the school’s athletic director.

Alicia Straub didn’t set out for a career in athletics, a career that paid her way to college and nearly landed her on an Olympic team. Athletics, as the stately Jamaican will tell you, chose her.

“I wasn’t running (growing up), not really,” she said. “In fourth grade, I started running at Sport Day, which in Jamaica is like, extracurricular, but it’s not like competitive. I would always run and I would come first. The track team, I beat them, but I never trained or anything.”

Straub, athletic director and first-grade teacher for St. Theresa School in Little Rock, literally kept running circles around the athletes on her high school track team to the point the coach could no longer ignore it.

“I was in music club, that’s what my mom wanted,” she said. “Sports day would come around and I beat all of them again. So, the coach for track and field was telling the music club teacher she needed to let me go and let me run track. And she’s like, ‘No she’s one of my best students, she represents the school for music. She needs to stay and continue for music club.’”

Fate eventually took over and Straub became one of the most celebrated and versatile athletes for her high school track program.

Graduating high school at 16, Straub ran for G.C. Foster College in her homeland where her coach had a connection to the University of Arkansas-Pine Bluff. It wasn’t long before the Golden Lions joined Straub’s growing stack of athletic scholarship suitors.

“I remember talking to my mom,” she said. “There was a scholarship from England, and she’s like. ‘It’s very cold there and you don’t like the cold. And then you have America; it is colder but it is less cold. So which one is it?’ I said, ‘Isn’t U.S. closer? And do I have to go?’

“I didn’t really want to go; I didn’t want to leave my mom because I’m the only child. But I just ended up in America.”

On the track, Straub was comfortable as ever, but everywhere else was a tremendous culture shock.

“When I get to the dorm, the food was different,” she said. “I remember saying, ‘Can I have some seasoning on my omelet.’ I didn’t even know how to say omelet, I think I say hamlet, because that’s how we say it in Jamaica.”

“And then they said, ‘Seasoning, you mean black pepper? You want paprika?’ No, the seasoning is like onion, bell pepper. I had to learn the different terminologies for stuff. I didn’t like the fast food all the time in the cafeteria; I remember not eating there for the first three months.”

The lack of track facilities at UAPB meant training on the asphalt highway and running on that surface, Straub fractured her right hip. Even so, she gutted out middle distance wins in the Southwestern Athletic Conference (SWAC), setting school records in the process. She was so good that even hobbled, she got an invite to the 2012 Jamaican Olympic Trials.

Her collegiate career came to an end in 2016 after which, she bounced around to different coaching and graduate assistant gigs, got married and she and her husband Joseph welcomed a daughter, Josephine. In 2018, she joined St. Theresa School, teaching first grade and helping coach the track team.

“There are just wonderful people here at St. Theresa’s; they are so uplifting and positive and I just love working with them,” she said. “And the kids are best. I love these kids. Last year, my students every time would ask me, ‘Did we win the game? How did we do in track? When I get older, I want to do sports, too.’ That’s just all across the school. I love that.”

In her short time here, Straub has inspired wider participation in athletics. Kids took their lumps as fourth graders last year but gained valuable experience and as fifth-graders, were regular-season co-champions of the parochial volleyball league. Eighth-grade boys drummed up enough interest to have a basketball team this year, the first in many years, Straub said.

“I tell you what, for both teams it was a challenge; at first, all we had was four players for each team, fifth-grade girls and eighth-grade boys. Yes, indeed,” she said. “Sure enough, we ended up with just enough to make a team, then one or two more joined later. For both of them to be ranked eighth place in the final standings, they are just brilliant, like magnificent. They did it! They didn’t have a lot of subs like the other big schools. I tell you, I’m proud of them.”

Straub, 30, said the growth of the St. Theresa sports program provides benefits other than on the court or track.

“First thing, confidence. Second, education,” she said. “When you work out, you rejuvenate cells, nerves, everything in your body. That gives you the energy to go on through your day and be more alert. Being more alert, of course you’re going to learn more.”