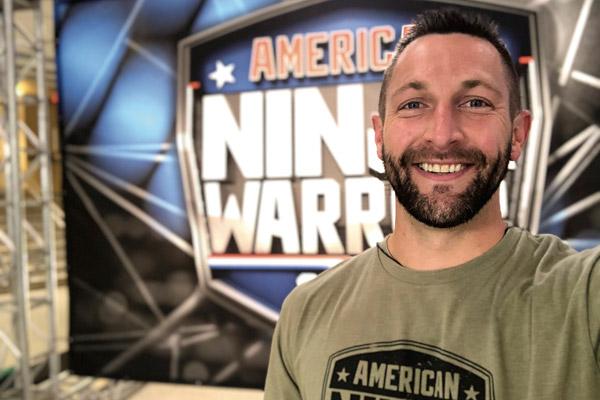 Read more about Father Stephen Gadberry's journey of faith and his time on "American Ninja Warrior."

Wynne resident enjoying the journey he is on

Father Stephen Gadberry made the sign of the cross and blessed a pool filled with water amid the flash of the “American Ninja Warrior” obstacle course in The Dome at America's Center in St. Louis.

As he did when he first competed on the physically demanding NBC reality show in 2018, he brought the Gospel message and a joyful image of a priest to a national TV audience Sept. 21.

“For a Catholic, it may look cheesy,” he admitted when he blessed the obstacle course’s pool with holy water, which the show asked him to do. “But for people who didn’t know about the Catholic Church, they see a priest living joyfully. They don’t see scandal.”

Instead of filming across a handful of cities, season 12 of ANW was filmed in a few summer weeks on the closed course in St. Louis and premiered Sept. 7. The show created a team format for competitors, pairing everyone from teachers to pole vaulters, and of course the “Hounds of Heaven” -- “the Papal Ninja” Sean Bryan, a Catholic theologian in Berkeley, Calif., who has made the ANW national finals three times, coming back after dislocating his shoulder in the finals last year; David Womelsdorf, an Assembly of God preacher in Chicago; and Father Gadberry, pastor of St. Mary Church in Batesville and St. Cecilia in Newport.

He applied in fall 2019 to again appear on the show. The last week in June, he got the call, initially assuming it wouldn’t be filmed given the COVID-19 pandemic. While he exercises with his own equipment about an hour a day, four to five days a week, he said there was no increased physical preparation, but spiritual discernment. He spoke first with Bishop Anthony B. Taylor, who supported him, along with his spiritual director and fellow priests.

“I’m very introverted,” he said. “There’s a lot of attention that goes with this that could easily be directed to me instead of the Lord. I am doing what I can to direct the attention to the Lord.”

The Lord kept taking him back to Matthew 24:14-30, the parable of the talents, recounting how the stewards chose different ways to handle the talents the master gave them, including one who buried the money.

“I’ve got this physical capability of doing it, but more importantly, I have this opportunity to be in my clerics and share a message of hope, even if it’s just a few seconds with literally millions of people,” Father Gadberry said.

He was in St. Louis July 14-17, following strict COVID-19 safety protocols. He was tested before leaving Arkansas, upon arrival and again while he was there. Father Gadberry also got to concelebrate Mass at the Cathedral Basilica of St. Louis.

During the episode, the show pointed out how St. John Paul II had visited The Dome. While it was an interesting fact to promote, Father Gadberry said, “It’s drawing attention to the saint. They ultimately gave a commercial for the Catholic Church.”

Bishop Robert Barron of the Archdiocese of Los Angeles, who Father Gadberry has worked with through the media ministry Word on Fire, was part of the virtual group watching the competition, as there was no in-person audience. The network referred to Bishop Barron and the others as Father Gadberry’s “fellow parishioners.”

“As Catholics, we know a bishop is not a parishioner. We were joking about that. I messaged him afterwards, ‘Sorry bishop, you got demoted,’” he laughed.

When Father Gadberry competed two years ago, he fell into the water on the obstacle course, with the hosts shouting that “he got baptized” by the water. This year, at the beginning of the course, he fell from the “lunatic ledges,” with the hosts saying “this thing is possessed.”

But, he popped up from the water with a smile and said, “I just got baptized again. I should have brought my soap.”

“I hate losing. I will be totally honest. As soon as I fell, especially so quickly, I was frustrated, there’s no other way to put it,” he said. “But I was able to let it go pretty quickly. That night of course, I tossed and turned and was frustrated by it. But it’s not my identity.”

Teammate Womelsdorf also failed the course, but Bryan advanced, missing the next round at the end of the show by only seconds.

Even though the team did not advance, the defeat was a spiritual lesson in dark times.

“With the obstacles on the course, you have got to commit to them. Once you focus on them, you have to go full speed into them; you have to go wholeheartedly not lukewarm, to use a spiritual term,” while also using prudence and discernment, he said.

“Once your path is clear, that’s the direction you need to go. You need to commit to it and go. I think that’s what we need to do as individuals and as a society. We have to recognize the danger and threats, but also not sit here forever. Find the direction we’re supposed to go.”

Father Gadberry said, personally, “I’ve kind of given it my run,” as far as competing on the show, but if he feels called by the Lord, he’ll do it again. But regardless, competing again was a lesson for everyone during an uncertain pandemic.

“Yeah, your life is crazy, that’s OK. That’s OK,” he said. “The important thing is just to wake up, give it your best shot and go for it again tomorrow.”

Read more about Father Stephen Gadberry's journey of faith and his time on "American Ninja Warrior."

Wynne resident enjoying the journey he is on