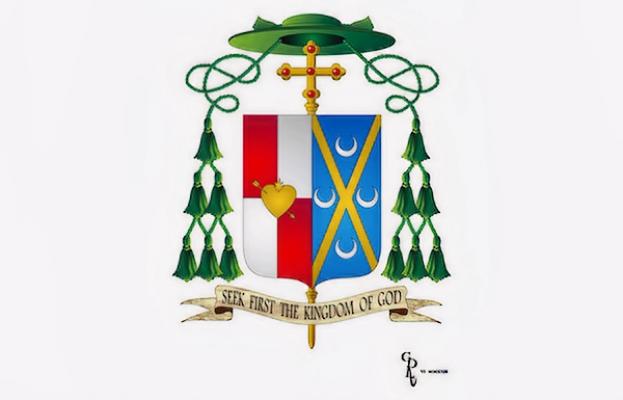 This is a summary of the description of Bishop-elect Erik T. Pohlmeir’s coat of arms provided by artist Renato Poletti of Italy.

“Seek First the Kingdom of God.” (Matthew 6:33) For his episcopal motto, Bishop Erik Pohlmeier has chosen these words taken from the Gospel of Matthew where the evangelist underlines the priority of the goals of the Christian life.

"The central image is the cross of St. Andrew who is the patron saint of the Diocese of Little Rock. It was there that Bishop Pohlmeier was nourished in the faith and experienced the foundation built by his family."

On the right side of the shield (the observer’s left since in heraldry, the right and the left need to be considered from the perspective of the soldier who, in ancient times, held his own shield) there is the coat of arms of the Diocese of St. Augustine. The quartered field of red (gules) and silver (argent) is reminiscent of the Spanish roots of Florida since red is the color of the kingdom of Castile, while silver is the color of the kingdom of Leon. The see city of St. Augustine is here recalled by the flaming transfixed heart, a very well-known symbol of St. Augustine of Hippo.

On the left side of the shield is the personal coat of arms of Bishop Pohlmeier where we find symbols that have particular meaning for him as primary influences in his priestly ministry and ministry as a bishop.

The central image is the cross of St. Andrew who is the patron saint of the Diocese of Little Rock. It was there that Bishop Pohlmeier was nourished in the faith and experienced the foundation built by his family. As a priest, he served all the parishes of Arkansas, some as pastor and others to promote evangelization. Andrew the Apostle was noted for evangelization in bringing his brother Peter to Jesus (John 1:41-42). Andrew is also the confirmation name chosen by Bishop Pohlmeier.

The crescent is a symbol to indicate the Blessed Virgin Mary, described in the Book of Revelation as a woman “... with the moon under her feet.” (Revelation 12:1) The crescent is featured in various depictions of Mary, including the traditional image of Mary as the Immaculate Conception, the patroness of the United States. This patronage is shared by the North American College in Rome, the seminary where Bishop Pohlmeier was formed for the priesthood. Mary was also the voice that first led Bishop Pohlmeier to consider a priestly vocation with the words spoken at the wedding in Cana, “Do whatever he tells you.” (John 2:5)

Further, the repeating crescent signifies evangelization with the command of Jesus to “Go out to all the nations.” (Matthew 28:19) In the four corners of the world, the Blessed Virgin Mary has played a key role in evangelization. She has been sent by God to many nations, often seen similar in appearance to people in that place. Countless souls have come to embrace her son Jesus because of her presence and her call.

The gold (or) is the first among noble metals, a symbol of the first virtue, the faith. The blue (azure) color symbolizes the separation from worldly values and the ascent of the soul toward God, therefore the run of the celestial virtues which raise themselves from the things of the earth toward the sky.

The exterior ornaments include a gold episcopal cross placed vertically behind the shield decorated with five red jewels symbolic of the wounds of Christ. The arms are completed with a green galero with 12 tassels that signifies the coat of arms of a bishop according to the Instruction of the Holy See, Ut sive sollicite, issued in 1969.